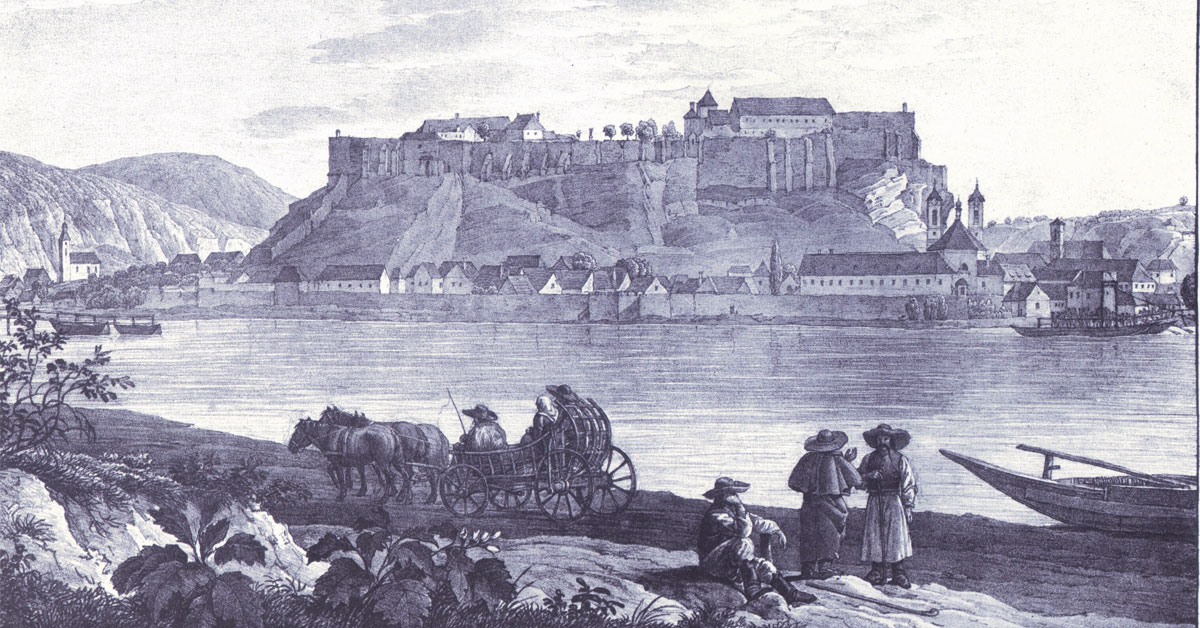 According to archeological finds, the area of Esztergom has been inhabited since prehistoric times. Celts, Romans and Avars chose Castle Hill and its surroundings as their place of residence. Marcus Aurelius, the philosopher-emperor while on campaign against the Quads, wrote some parts of his Meditations by the Garam River, which joins into the Danube across Esztergom.

In the tenth century, Prince Géza established his seat here on the foundations of the former Roman fortress. According to the small legend of St. Stephen, his son Vajk was born and baptized here as Stephen and was later crowned ruler of the new kingdom, thus making the city a royal seat.

In the church organization established by King Stephen, the diocese of Esztergom stood above the others. From the beginning, it had the rank of archbishopric, and its archbishop had the privilege of crowning Hungarian kings. Stephen built one of the largest cathedrals in the country on the Castle Hill, the so-called beautiful church, its patron saint became St. Adalbert.

Over time, the settlement was inhabited by wealthy foreign settlers who were mainly engaged in long-distance trade. Our coat of arms, which is still in use today evolved from their 12th century seal. In the time of King Béla III major alterations were made to the castle. French artists and bricklayers arrived at the royal court, to whom we can thank the castle chapel, which can still be visited today.

During the Mongol invasion the castle stood against the besieging army, but the city was largely destroyed and sacked, so the royal court moved from Esztergom. Béla IV left the castle to the archbishop in 1256 and allowed the citizens to build a new city on the site of the old. Although the royal court left Esztergom, our second founder was buried in the Franciscan church here.

In the following centuries, the archbishops of the time continued to build and expand the castle. King Matthias' educator, János Vitéz, created a magnificent Renaissance courtyard with a huge library, and an observatory. Artists and scientists came from Italy. Tamás Bakócz's unique Renaissance red marble burial chapel can be seen even five hundred years later.

The fact that Archbishop László Szalkai fell in the battle of Mohács brought a big break in the development of the city. In the following years, Esztergom changed hands several times between Ferdinand and János Szapolyai. The archdiocese and the chapter moved to Nagyszombat (present day Trnava, Slovakia) and Pozsony (present day Bratislava) due to the Turkish conquest. Because of this, the holdings of the Primate Archives and the Cathedral Treasury were saved.

The castle fell into Turkish hands in 1543 and became an iconic frontier fortress of the Ottoman Empire. We have records of the Ottoman constructions of the time thanks to the Turkish traveler Evlija Çelebi. Still standing architectural monuments from the time of the conquest, such as mosques, baths, or bastions, testify to the constructions of the age. Although the Fifteen Years' War succeeded in taking the city back for a decade between 1595 and 1605, it did not come into Christian hands until after the battle of Párkány in 1683.

Esztergom, which had declined in population by then, regained its status of a free royal city in 1708. Although the reconstruction of the settlement began, the castle was reclaimed by the archdiocese, and planning began to return the primacy to its ancient seat, this was not realized until 1820 with the appointment of Archbishop Sándor Rudnay. With him began the forty-seven year long work that erected the monumental main church on Castle Hill.

Thanks to Archbishop János Simor, the country's third public museum, the Christian Museum, opened its doors in 1875.

In 1881, the Hungarian Red Cross was founded here.

The first iron bridge over the Danube was built in 1895. The same year the city was connected to the railway network, and the neighboring villages of Szenttamás, Szentgyörgymező and the Watertown (Víziváros) were annexed by Esztergom. After the First World War, the county seat lost most of its catchment area, and the archdiocese lost the vast majority of its land.

Then, based on the swimming pool and bath opened in 1912, Esztergom redefined itself as a spa town. The photo of world-famous photographer André Kertész “Underwater Swimmer” was taken in the bath in 1917.

During the interwar years, Mihály Babits hosted countless writers, poets, actors and artists in his villa on the foothills, involving them in the cultural life of Esztergom. Their handwriting can be read on the autograph wall of the museum building.

The settlement became one of the centers of the 1938 St. Stephen's Memorial Year, and as a result, national attention was paid to the newly excavated Árpádian palace, which was opened to the public.

During World War II, the city suffered substantial damage. The blown-up Danube Bridge stood truncated for decades. In 1973, Esztergom celebrated its 1000th anniversary with a large-scale series of events.

Over the decades, Esztergom has grown into a significant school city, and after the fall of communism, it has become a center of the automotive industry through the Suzuki factory and its suppliers. The Mária Valéria Bridge was rebuilt in 2001, so a pedestrian connection was established between the two Danube sister cities again.

Four years after joining the European Union, on 21 December 2007 we entered the Schengen area. Border control was completely abolished, accompanied by a huge ceremony.